Dr. Groh evaluates all presenting conditions with a comprehensive approach to diagnosis, followed by patient education to make sure the best treatment option for each patient is chosen. Having completed both a hand and shoulder fellowship, Dr. Groh offers his patients the most expert care in shoulder, elbow and hand injuries. 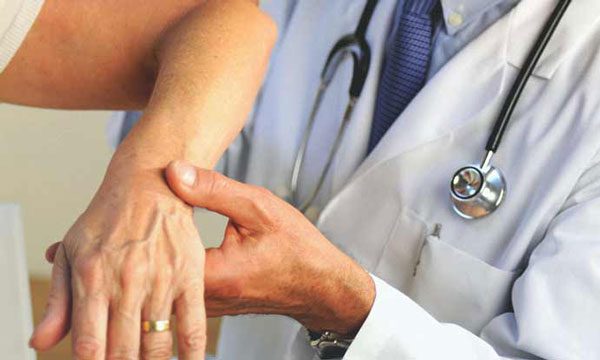 Dr. Groh’s treatment results are carefully documented, measured, and monitored in an electronic medical records system with the goal of creating the most reliable and predictable treatment outcomes in every patient. Non-operative treatment in all conditions is always chosen first when appropriate and includes the use of dietary supplements, education, medications, anti-inflammatory creams, splints, therapy, and injections.  Injections may be used to confirm a diagnosis in some instances, and as definitive treatment in others. Alternative treatment options including ultrasound, Iontophoresis, electrical stimulation, physical therapy, and occupational therapy are also considered when appropriate.

When surgery is the best choice, the consideration of surgical risk, complication rate and time to obtain maximum medical improvement after surgery is calculated and explained. In planning for surgery, four parameters are considered to assist the patient in determining the prognosis and self-care needs after surgery:

Once surgery is selected, surgical choices fall into one of seven categories:

Repair is the surgical reapproximation of injured tissue back to its pre-injury condition. Injured tissues include lacerated muscles, tendons, ligaments, nerves, arteries, or broken bones (Fractures). This procedure category is usually done on an urgent basis within one to two weeks after injury because further delay will not allow for a primary repair and converts a primary repair into a reconstruction which is always more complex and often carries a higher complication rate. Tissue repair for nerves, arteries and hand injuries requires specialized training in hand and microsurgery for the best outcome.

Release is the decompression or release of tight compartments surrounding nerves, arteries, tendons, and stiff joints. Tight muscle compartments develop from severe swelling following major limb trauma that may or may not involve broken bones. Nerve conditions requiring a release include carpal tunnel syndrome, cubital tunnel syndrome, radial tunnel syndrome, Guyon’s syndrome, pronator syndrome, and suprascapular nerve compression. Release of tight tissue compartments called a Compartment syndrome is often required after a major extremity injury. The release is done to prevent the loss of blood supply to the injured and swollen limb. Releases in most cases are done on an elective basis except when the injury affects the blood supply or produces intolerable pain, as occurs in compartment syndrome. In this situation, treatment is done as an emergency. An example of a nerve compression is carpal tunnel syndrome. In this condition, the median nerve is slowly over time compressed at the level of the wrist by swelling of the surrounding tendon linings. When conservative measures of splinting, ergonomic changes, and steroid injections does not improve the symptoms, a carpal tunnel release is indicated.

Replant is the reattachment of a severed body part back to its original normal location. Replantation of fingers, arms or any severed body part with the use of microsurgical techniques, meaning it requires the use of an operating room microscope. Replant procedures are always done as an emergency, typically within hours of suffering an amputation.

A Resection is the removal of tissue or a body part when that tissue or body part has no possibility of useful function, even if reconstruction techniques are used.

A Resurfacing procedure is the most conservative type of joint replacement (arthroplasty) involving only the replacement of the actual cartilage layer of a joint. It is performed with the use of transferred interposed donor tissue or with the use of a prosthesis made of metal or other type of artificial material (i.e. pyro-carbon). In this procedure, the cartilage surface of a joint is replaced with the prosthesis or interposed tissue without the removal of the supporting bone beneath it. This procedure is commonly done for arthritic conditions of all types and is performed on an elective basis.

A Replacement, also called an arthroplasty and involves the partial or complete replacement of a joint surface by a prosthesis. The replacement can involve one side or both sides of a joint surface and often depend on the cause of the arthritis. Replacements commonly take away more bone stock than a resurfacing procedure and are performed for various types of joint arthritis. In some instances, the arthritis is accompanied by lack of muscle-tendon function and special prostheses have been developed that address this special circumstance. In the shoulder, this type of prosthesis is called reverse shoulder prosthesis and it uses the deltoid instead of the rotator cuff muscles to move the shoulder joint. Replacements are done electively.

Reconstruction, the most complex surgical treatment category, and it is what Dr. Groh specialized as a surgeon. It involves the creation of alternative anatomic parts that have the intent of recreating normal anatomy and function in injuries that are more severe and cannot be treated by repair alone. Reconstruction often involves revision of previously failed surgical procedures. Revision surgery may include the need for removal of previous implants and utilization of specialized revision components. Reconstructive procedures include the use of all of the other surgical treatment categories when necessary to obtain the best possible outcome. These procedures are normally performed electively and planning is critical for a good surgical outcome and postoperative therapy.